Tennessee’s Great Smoky Mountains are famous for their family friendly entertainment! In addition to their wonderful collection of music shows and dinner theaters, the Smokies are also home to some of the very best magic acts in the Southeast. To help you make the most of your next vacation, Auntie Belham’s Cabin Rentals has put together a guide to three incredible magic shows in Pigeon Forge and Gatlinburg.

1. Terry Evanswood & The Wonders of Magic

Few magicians can boast a more impressive resume than Terry Evanswood. A child prodigy who started performing at age 10, Evanswood received a scholarship to attend the Chavez College of Magic. When he was 21 years old, Terry became the youngest magician in history to perform at the legendary Magic Castle in Hollywood. The International Magicians Society has bestowed upon Evanswood their highest honor, the Merlin Award (the magical equivalent of an Oscar).

Terry has performed all around the world and he currently headlines The Wonders of Magic show at WonderWorks. When you see Terry’s signature show, you will be amazed by his jaw-dropping illusions, mind boggling card tricks, and flawless slight of hand tricks. The Wonders of Magic includes a lot of audience participation, so your kids might just become part of the show! Be sure to stick around the lobby after the performance so you can get a photo with Terry or an autograph. You definitely don’t want to miss one of the best magic shows in Pigeon Forge!

2. Impossibilities: An Evening of Magic, Mindreading, and Mayhem 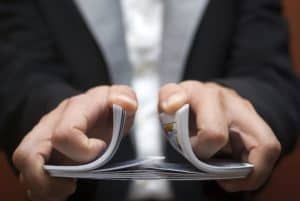 The funniest magic show in Gatlinburg (and the Smoky Mountains) is definitely Impossibilities: An Evening of Magic, Mindreading, and Mayhem. This fast-paced show at the Gatlinburg Space Needle’s Iris Theater stars Magical Comedian Chris Collins and Master Mentalist Erik Dobell. Collins and Dobell have performed everywhere from Las Vegas to South Korea and have been featured on a number of popular TV shows, including America’s Got Talent.

In the Impossibilities show, Collins and Dobell wow audiences with head-scratching tricks that will keep you guessing weeks after your vacation. Filled with hilarious banter and plenty of audience participation, this show is a can’t-miss attraction for any family getaway in Gatlinburg.

The Winter Carnival of Magic is an annual event held in early March every year. It’s a 3-day convention that features two evening magic shows in Pigeon Forge! Since 2005, some of the greatest magicians have paid a visit to the Country Tonite Theatre to share their talents with locals and visitors in the Smoky Mountains. The magic shows are held on both Friday and Saturday night of the convention. Some magicians who have attended in the past include Terry Evanswood, The Pendragons and Jeff McBride. Not only are there fascinating magic shows at this event, but it also features several lectures, a dealer’s room, a close-up competition and a stage competition. You won’t want to miss all the magic that happens at this festival!

Want to see some other shows? Here are the best shows in Pigeon Forge!

When you stay with Auntie Belham’s Cabin Rentals, you will be near all of these amazing magic shows in Pigeon Forge and Gatlinburg. With everything from 1 bedroom cabins to 9 bedroom cabins, we are guaranteed to have the perfect accommodations for your escape. To start planning your vacation, browse our selection of cabins in Pigeon Forge and Gatlinburg!