The folks over at Sugarlands Distillery in Gatlinburg have been busy this year. Not only are they becoming one of the most popular moonshine distilleries in the Smoky Mountains, but they have also worked hard to partner with several celebrity moonshiners to bring guests an even bigger array of flavors as part of their Legend Series.

To learn more about the new flavor and the Legend Series, read below!

The brand new flavor from Sugarlands Distillery in Gatlinburg is called Mark Rogers American Peach. The first 70-proof flavor to be released by the distilling company, the new American Peach moonshine works to capture the natural flavor of sun-ripened peaches with a powerful kick that follows.

The American Peach flavor is a little stronger than the other fruit flavors offered by Sugarlands Distillery in Gatlinburg, including their Sweet Tea, Lemonade, and Blackberry moonshines. However, it is not as strong as their Silver cloud and Jim Tom Hedrick’s Unaged Rye that both boast an impressive 100-proof. 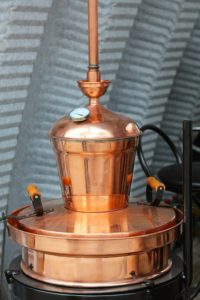 The namesake of the new moonshine flavor from Sugarlands Distillery in Gatlinburg, Mark Rogers, became famous in the moonshine community with his appearances on Discovery tv show “Moonshiners.” Since 2011, the popular tv show “Moonshiners” has given viewers a special look into the typically private lives of moonshining in the Appalachian mountains.

According to the show, Rogers operates his still out of Graham County, North Carolina, and when he is not making moonshine, he is an avid outdoorsman who loves to go hunting and fishing. The show also explains that Mark was first introduced to the craft of moonshining by his uncles when he was just 8 years old.

Rogers is the second celebrity moonshiner to release a new spirit with Sugarlands Distillery in Gatlinburg. Earlier this year Jim Tom Hedrick partnered with the distillery to create their Jim Tom Hedrick’s Unaged Rye. Next up in the Legend Series for Sugarlands will be a partnership with the show’s cast member named Steve “Tickle.” They have not yet released what the new flavor will consist of.

If you would like to watch the show for yourself, season four is running now. New episodes are aired every Tuesday night at 9 p.m. on Discovery.

About Sugarlands Distillery in Gatlinburg

Since opening earlier this year, Sugarlands Distillery in Gatlinburg has quickly made its mark among popular attractions in the Smoky Mountains. Not only can visitors come here to sample the flavors produced by the professional moonshiners who operate the stills at the distillery, but they can also take a personalized tour of the facility. When they are done, staff members of the Gatlinburg distillery encourage them to take a jar or two of their favorite flavors home with them to enjoy later.

During the sampling, guests and visitors will learn about the history and technique that go into making each individual flavor. After you and your group spend the afternoon exploring the Sugarlands Distillery in Gatlinburg, as well as the many shops and attractions located around it, why not come back and relax inside one of our spacious rentals? Located just a short drive from the Parkway, all of our Gatlinburg cabins come equipped with outdoor hot tubs, full kitchens, private decks and unbeatable mountain views.

To learn more about our cabins, be sure to browse our online Smoky Mountain cabin inventory.

If you have any questions, please do not hesitate to contact our reservation team at the number below. See you in the Smokies!